Today, Patrick is 6 weeks old!  His story still has me amazed!


Patrick was due on April 12.  I really wanted him to be born on April 13th as that is my dad's birthday, and we named Patrick after my dad.  (Patrick's middle name is the same as my dad's name, Robert.  It was also my grandfather's middle name.)  We went to Scalini's for their Eggplant Parmesan on the 11th with the hope that it get labor started. (We didn't want to go on the Lord's Day, the 12th.)  Patrick didn't have any of it!
By Thursday April 16th, there was still no sign of labor other than the contractions I'd been having for weeks.  I did all my normal Thursday activities which included dropping two kids off at the church for classes, driving over an hour to the midwife's house, and driving back to pick up the kids.  On top of all that, we decided to make another trip to Scalini's!  (We didn't want to go on Friday because of rush hour traffic and I didn't want to wait till Saturday.)  Eggplant has a lot of oxytocin which can help start labor.  If you have a baby within 48 hours of eating their Eggplant Parmesan, Scalini's will give you a t-shirt for the baby, and a $25 gift certificate. 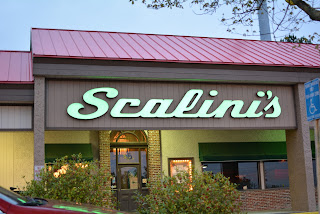 When we got home, I took a bit (and I mean just a tiny bit) of Castor Oil as the midwife had suggested and some Evening Prime Rose Oil, texted the midwife so she could at least know what was going on, and went to bed.  I figured if I was going to try to induce labor, I might as well try everything!  Bed time was around 10pm.
I woke up around 11:30 or so, and again around 12 to go to the bathroom.  At 12:30, I was started having some really "odd" cramping.  I thought it might have been because of the castor oil, but I texted the midwife as she asked me to let her know if anything changed or if anything unusual happened.  Then about 10 minutes later, I felt like some "bubble up" and had a bit of a wet sensation.  I was still texting with my midwife, but I woke Adrian up so that I could turn the lights on to see what happened.  This was just before 1 am.  (Looking back, it was probably the last of my water coming out.  It probably broke earlier when I was needing to go to the bathroom a lot!) 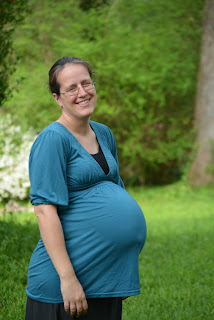 Adrian got up with an adrenaline rush and started trying to get the birth pool filling.  He really struggled to get the hose attached to the faucet, so he ran back and forth between both the upstairs bathrooms trying to get something to work!
Meanwhile, I had knelt by the side of the bed and texted with my mom so she would know what was happening, and my best friend so she could pray.  I felt like I needed to go to the bathroom, and I'd feel better.  I was still in denial that labor was moving as quickly as it appeared!
Each time I had a contraction, Adrian would come and put pressure on my hips.  The contractions were so hard that I could not relax and all I could do was cry out to the Lord for help to get through them!  Fortunately, I wasn't very loud and all the kids slept all night!
I finally told Adrian to stop missing with the birth pool as it wasn't going to be ready in time, and to get the bath tub started.  It turned out not to matter at all, as I didn't move from beside my bed once I knelt there.  At 1:15, I told mom to come now!  I knew the midwife wasn't going to make it on time.  At some point, Adrian called the midwife.  She talked through what was going on, as I really felt like Patrick's head was descending and that he was going to come out no matter what I did!  With one or two pushes, Patrick's head was out.  It turned out, that pushing his shoulders out hurt more than his head!  But Adrian was ready to catch him, and the midwife was on the phone to help with anything that came up.  And just like that Patrick was born at 1:26 am; just an hour after I called the midwife and about half an hour after I woke Adrian up!
After Patrick was born, I held him and managed to lay back in a reclining position.  Adrian called my mom to tell her that Patrick beat her to our house!  She didn't believe him at first!  She and the assistant midwife arrived about 10 minutes later and the main midwife arrived about an hour later.
We are very thankful that we had been planning a home birth, otherwise Patrick would have been born at home or in the car without us having a plan or a person to walk us through the delivery!
Patrick was healthy and I was doing well.  So the midwives went through their routine to check everything and give us some instructions.  Patrick weighed in at 9lbs 12oz and 21 inches long.  Then they left us to rest. 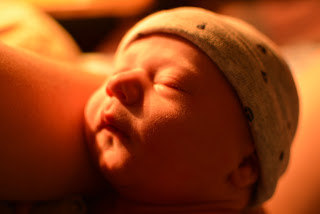 Mom took a nap on our couch until the kids got up.  The kids were very surprised to see their new brother and they were excited to get to hold him.  After they saw their new brother, my mom got the kids breakfast and let me sleep a little more.  Then she went home and we got to hangout as a family of 8!
Posted by Bethany at 5:39 PM