I somehow feel cheated.  The project is supposed to be 52 weeks long, but there is still almost another full week! :)  I don't mind.  I picked up my camera quite a bit this week.  With the break from school, we have a lot of projects going on!  This week had several challenges and many joys.  This post is for Dec. 20 - 26.


Sunday: Keira fell at school on Thursday.  From Friday morning, she refused to walk on it!  We weren't sure what to do because though it looked a little swollen, nothing looked "wrong".  We iced it on and off through Friday, took her to our chiropractor on Saturday, and to church on Sunday.  At church, one friend told us about her knee dislocating on it's own, and another friend, a PT, looked at Keira's knee and said that nothing appeared broken or torn.  Another friend at church let us borrow her wheelchair.  And yet another friend tried to get their child's size wheelchair working for Keira to borrow, too!  I am so thankful to God for putting us in such a loving church that was so caring to Keira during her distress.
This is Keira trying out "her" new wheelchair Sunday evening.  I caught her making one of her faces!  I love it! :) 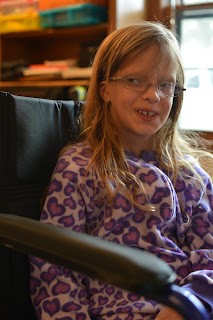 Monday: I started cutting the fabric for Mercy's bed quilt!  I am thankful for new starts and new ideas.  It is fun and fresh and exciting.
To continue Keira's story, she went back to the chiropractor on Monday and was given a good bill of health!  Later on Monday, I took her to an orthopedist who said nothing was broken or out of place and said that Keira probably had a patella subluxation.  That just means that her knee cap comes out of place, but then pops back into place on it's own.  The doctor said that is excruciating, but that she should be able to be up and walking again soon.  She also gave Keira a knee immobilizer to help her walk without hurting her knee.  Keira got up and moved around well Monday night with this brace on! 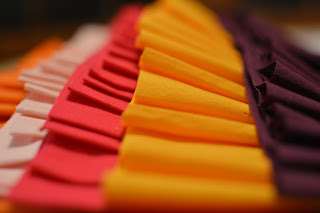 Tuesday: This is an Amaryllis Red Lion.  I bought the bulb at walmart, and just love how quickly and beautifully they grow!  I am thankful for quickly growing beautiful flowers!  We could almost watch this flower open throughout the day, and the kids and I enjoyed looking at it open as the day went on.
On Tuesday Keira was resting in a chair after walking around for a bit, when she suddenly started crying inconsolably!  She had just been sitting there!  Keira was holding her foot at a really odd angle, and we concluded that she most have dislocated her knee again.  It took a bit of time and prayer before Keira was good enough that I could leave her to run some errands.  Fortunately, she was back up walking with some effort and her knee immobilizer brace. 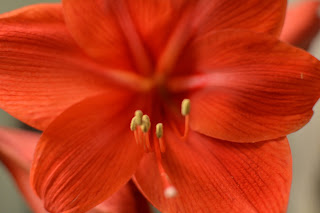 Wednesday: More of my flowers opened!  I am thankful for quiet days at home!  I thought the break would be more restful, but that hasn't been the case.  So I am savoring every day at home. 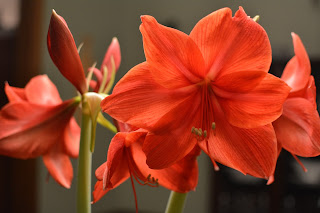 Thursday: I am thankful for helpers!  It is so much easier to make a huge pot of chili with help.  My helpers cut most of the veggies and open all the cans.  I should let them work on cooking the meat or measuring out the spices, but I haven't gotten them to that point yet.  What a blessing to have help in our work! 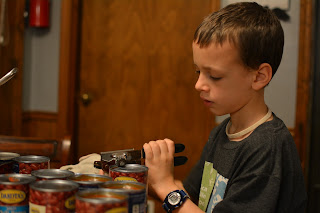 Friday: CHRISTMAS!!!  I was not eagerly awaiting Christmas like my children.  I got up early to make a nice breakfast.  The kids got up and opened their stockings, ate breakfast, and opened their presents.  They were very excited and I think they were all satisfied with what they received.  I am thankful for see joy in our children!  Our kids' great Aunts bought them a telescope for Christmas since they are studying astronomy in school.  Mercy helped Adrian assemble it.
By Friday, Keira was moving much better, so we had her walking around more and more with the knee immobilizer. 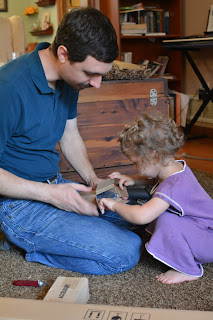 Saturday: My Christmas gift!  I don't know what is worse, that Adrian bought me an iron for Christmas, or that I was so excited about it!  :)  It is designed to always sit on it's press plate.  It has feet guards that retract when you touch the handle so that it will iron.  Then when you let go, the feet pop out to lift the plate off the surface and wait to be used again.  It is a great gadget for quilters.  I am thankful to my husband for such a fun tool that will help make quilting go more smoothly. 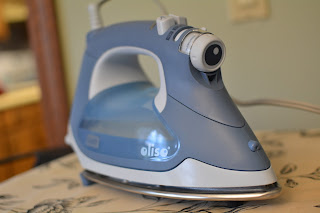 On Saturday, we gave Keira a different knee brace that helps to support her knee, but doesn't immobilize it.  She likes having it on, and now has more confidence to walk on her own.
In the way of record keeping, the white van, affectionately named Moby Dick, had to go to the shop to have an engine tune up, so we are down to the regular van for the Lord's day.  After finding out about the van, Saturday evening, our washing machine broke catastrophically!  It tore itself apart and the tub that holds the drum in place has been torn off of it's mounts.  So we will be finding a replacement very quickly!  Oh well, who wanted to spend Christmas money on fun things anyway. :)  (I am grateful for the timing as we do have money to make the repair on the van and to replace the washing machine.)
Posted by Bethany at 7:00 AM