For a long time, I have followed the blog 365 Atlanta Family. Lesli blogs about her family's adventures all over the state.  One of her posts was about a park inside the perimeter that had a ruin and a suspension bridge.  Megan and I were ready to go!
We decided that last week was the perfect time!  We parked were Lesli said in her post.  Even though she made it sound like Hahn Forest was a public park, it had a sign stating that you needed an Emory hang tag to park your car in the lot!  We decided that we would risk parking there anyway, and headed out for our hike.  We walked down some stairs towards the creek.

This was taken just before our hike on a bench built into the wall. 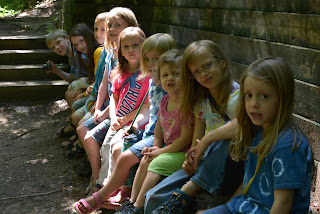 After walking under the main road, you come to the ruins of a bridge.  We were surprised by the lack of fencing around the edge of the bridge as it just dropped off into the water!  With 10 kids, I was a bit nervous, but the kids listened well, and stayed away from the edge.  The waterfall was pretty. 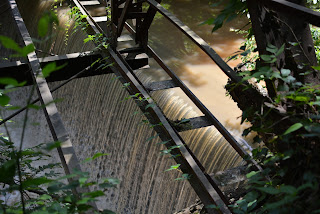 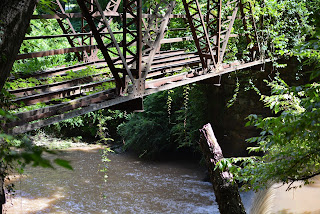 Just passed the ruined bridge was the beginning of the trail and this sign.  Fortunately with such a large group of kids, the snakes had plenty of warning that we were coming.  We didn't see any.  We also manage to leave without poison ivy. 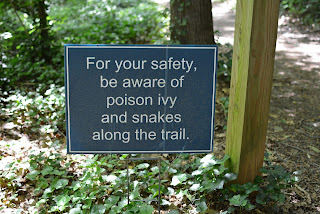 The trail follows the creek for a little while, and you can occasionally see some of the buildings on the Emory campus.  Otherwise, you wouldn't know you were so close to the city!  After a while, we got to the suspension bridge above us spanning the creek. 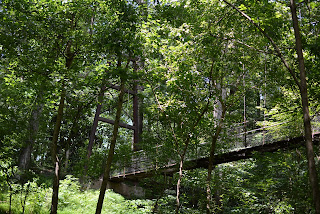 Before getting to the trail up to the suspension bridge, we saw the ruins to a mill and a small waterfall. 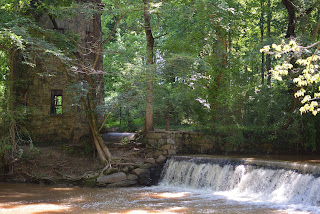 Mom, Megan, and I in front of the suspension bridge. 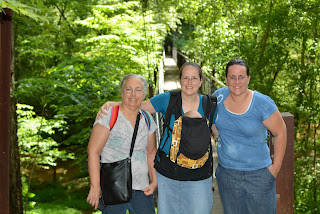 Mercy was scared of the bridge at first, but soon found that it was a lot of fun making it rock back and forth. 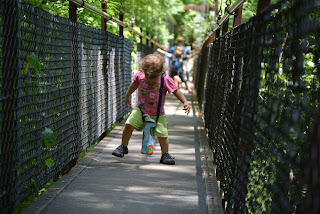 On the far side of the suspension bridge, we took the trail back towards
the ruins and took some pictures there before heading back to eat our picnic lunch on the trail near the mill waterfall.

(I didn't take any pictures of the whole building.) 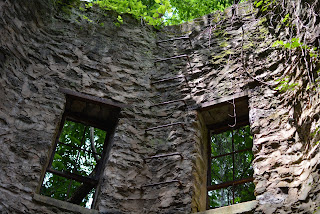 There was a lot of graffiti inside the mill.  I thought it was very interesting. 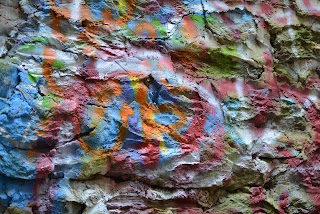 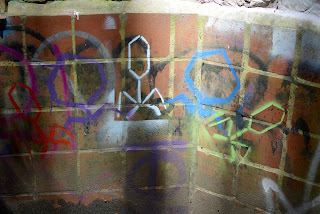 We ate our lunch a headed back.  Other than the confusion/uncertainty about parking, the only draw back to this beautiful park is the lack of bathrooms.  We all had a wonderful time!
Posted by Bethany at 7:00 AM