Last year, I tried to take a picture every day of the year.  I got tired of the project several times, but stuck with it.  This year, I have continued to take pictures, but I wanted to pursue other things.  Particularly, I wanted to make some time to sew.  I don't want to sew all the time as my kids need me and I need to take care of my home, but I do hope to take some of my time to sew this year.  To that end, I started on three projects.
The first is a quilt for Mercy.  See, I have made each of my children a bed size quilt for them when they are between 3 and 4 years old.  I bought a quilt pattern, a first for me, to make a Mercy's quilt.  With this pattern, I thought it may take me a year to make it, so I started early.  As it turns out, I have made good progress.
With this pattern, you first cut all your fabric, then you cut and sew the curve pieces.  That scared me!  I had only sewn curves once and that was for a quilting bee.  Adrian told me I should stretch myself, and I am so glad I did!  Though the curves took time and care (not mindless sewing), they weren't that hard when I got into the rhythm of them. 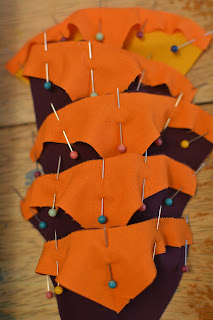 The first several curves took an hour or so to sew, but after that, I got faster and I finished the rest of the required curves sooner than I expected. 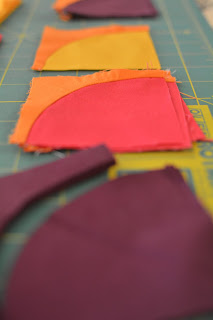 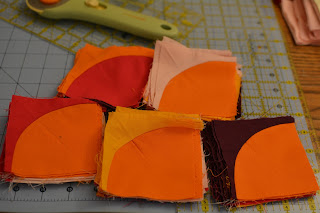 The quilt is assembled in rows.  It seems like a lot of work to make each row and then sew the rows together, but for someone like me, who isn't used to following a pattern, this worked really well.  The pattern was easy to follow and I LOVED watching each row add to the overall design of the quilt. 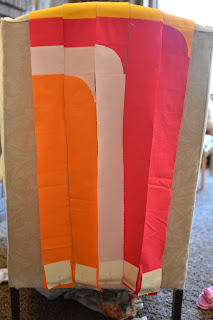 Even the seams look fun! 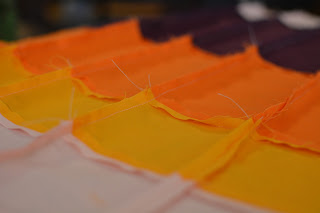 The first completed panel.  This quilt is going to be huge!  It is supposed to be a twin, but the width is probably one and a half times as big as my other children's twin size quilts! 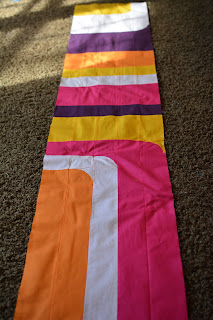 The second project that I started was the Mighty Lucky Quilting Club.  Each month a well know quilter designs a project to stretch and grow those involved.  The project for January was bias tape applique.  I had only made bias tape once before (I usually use straight grain tape for my quilts), and I don't like applique!  I eventually found a line drawing that I thought was interesting, and tried to replicate it with the tape.  I really like how it turned out!  I may try this technique again.  In fact, I am talking to Megan about using it to write a name on the back of a quilt she is thinking about making. 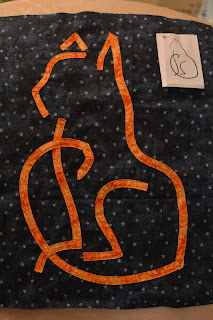 The last project I started uses fabric that I have had for at least 6 years!  I hope this one wouldn't take too long to finish, but I am not really in a hurry to work on it either.  Mercy's quilt is a higher priority right now.  But in January, I cut into my Dr. Seuss fat quarter bundle to make wonky stars!  Wonky stars are still some of my favorite blocks even though I have made them several times.  I thought it would be an appropriate fit for Dr. Seuss. 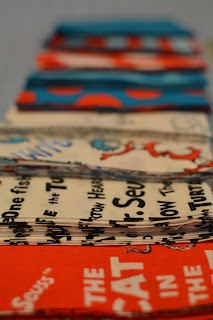 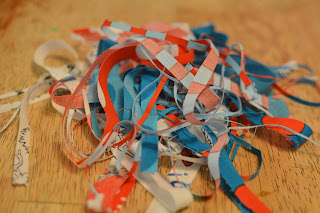 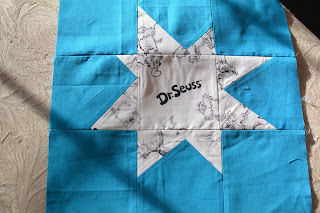 Email ThisBlogThis!Share to TwitterShare to FacebookShare to Pinterest
Labels: Sewing