{If you haven't read part 1, you may want to go do that.  I didn't balance the picture load well!  The previous post has many more pictures.}

After returning from the playground, Patrick cuddled up on me and fell asleep.  I really enjoyed the rest, too!  Everyone else went for a bike ride around the camp ground.  Several people played 7 Wonders after the riding bikes, the others played by the lake.  One of these days I will get in on a game of 7 Wonders, but I haven't yet. When the game was over, we had lunch and hung out for a bit.  Then Patrick got fussy again, so I snuggled up with him for another nap/rest.  Adrian and the Presley's took the kids to the little beach area to swim.  I really enjoyed the quiet with Patrick! 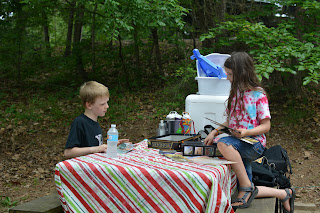 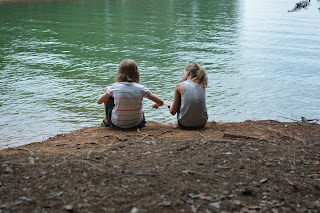 Megan's husband grilled hamburgers and hot dogs for all of us, and we had a bunch of chips and things to go with them.  We enjoyed a quiet night around the fire again.  I put Patrick to sleep early and Mercy quickly followed.  But while the others were at the bath house, I got a text saying that my grandmother was in the ER.  So as everyone returned, we gathered together and prayed for her then went to bed.
In the morning, I saw another text saying that she was sent home to rest!  We ate breakfast and cleaned and packed up.  When things were packed in the car, we played Race for the Galaxy with Megan and Clayton.  The kids all ate lunch together, and just enjoyed being together. 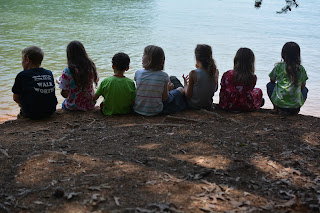 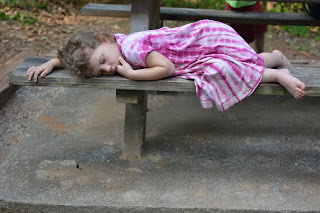 (Mercy was just wiped out!)


We had a great time, but it was a bit short.  I don't think I could have planned for more time.  Maybe next time I can do that!
Posted by Bethany at 7:00 AM