Sunday: Patrick's first birthday!  We didn't do much for his birthday because it is the Lord's day.  I did remember to take pictures of Patrick!  Here he is laughing at Avalyn and looking too grown up.  He started trying to walk several days earlier, and was walking at least 50% of the time on his birthday.  I am thankful for this little guy and for him to be walking! 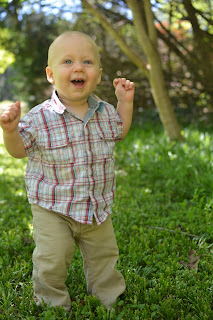 After taking pictures of Patrick, and getting everyone ready for bed, Keira came to us to say she wasn't feeling well.  I listened to her and she sounded a bit wheezy.  As Adrian and I talked about what to do, she went from wheezy to struggling for every breath!  In the span of 15 minutes, we went from well she should be ok, to let's take her to the Immediate Care, to well we can make it to Scottish Rite, to load everyone in the car right this minute and lets go to the neared hospital.
It felt like a third world country at the Gwinnett Medical ER because they are doing renovations and hand temporary walls and plastic up and almost no one waiting spoke English.  We waited for what felt eternity as Keira struggled to breath.  In reality, it was probably 30 minutes.  But no one looked at her or seemed to care until Keira was called into triage.  Then things moved quicker.  She was moved into an ER room, and given two doses of inhaled epinepherine.  We were told she had croup and they wanted to transfer her to Scottish Rite to be observed.
Once at Scottish Rite, we thought we would be watched for an hour and then released, but they decided to admit her and watch her over night.
Through all the craziness, my mom sat with me in the ER and drove to Scottish Rite so she could take us home at  2 or 3 in the morning.  But instead, she just turned around and drove home.  In the Lord's providence, mom was home and in a position to help Megan the next morning (Monday) when her husband was injured at work and had to go to the ER.

Monday: Keira was released from the hospital just before lunch.  Adrian managed to drive Moby Dick downtown (quite the feat!) and picked us up.  Needless to say, we weren't really up to par, but we managed to get Patrick some cake for his birthday celebration Monday night.
I am thankful for hospitals and doctors and nurses who are available to help when we need them. 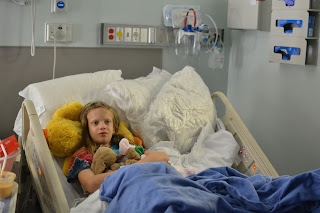 Tuesday: After Adrian got off work, he sprayed the kids with the hose since it was actually hot!  The kids had a great time running and screaming and getting soaked.  Keira stayed inside for the action.  Patrick wasn't too thrilled by it, and Avalyn was complaining of her foot hurting her.  She made it through about half the fun before she started feeling bad.  She spent a good portion of the evening on the couch under her quilt.
I am thankful for simple joys! 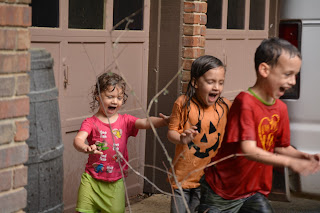 Wednesday: I took Avalyn to the orthopedist as her foot was a bit swollen, and the pain from the night before had been so intense.  Even though the X-ray didn't show a break, based on the swelling, where she hurt, and how she was walking, they decided that her foot was broken.  Avalyn felt better almost instantly!  Again, I am thankful for God's protection!  We believe that Avalyn broke her foot Sunday evening around the time we were dealing with Keira's breathing trouble!  Unfortunately, I didn't even learn that it was bothering her until Monday afternoon.  But God took care of her and us through the craziness! 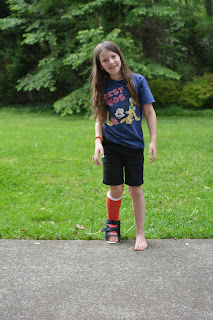 Thursday: This was my only picture from Thursday!  Classes for the kids were cancelled and all the kids were disappointed.  Even though the week had been crazy, they were all well enough to attend classes.  I was happy for a light day, though.  The jellies were for pancakes, and each of the kids wanted something different!  They do love their choices when it comes to condiments!  I am thankful for choices and the different flavors.  What a good life we have to be able to have so many flavors to choose from! 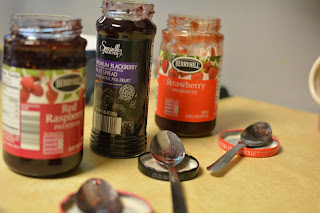 Friday: We watched Megan's kids so that she and Jon could go out for dinner.  Avalyn decided that she could still climb her favorite tree!  I took pictures of her doing it, then told her she had to get down!  What kind of crazy person climbs a tree with a broken foot?!  The kind of person who wants to break their other one!  I am thankful that Avalyn is still enthusiastic about life even though her cast has slowed her down and prevented her from doing some things. 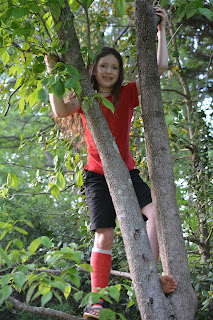 Saturday: I took Sophia out for a donut because she read Genesis 1 to me.  She is doing so well with her reading!  I am thankful for the ability to read and learn. 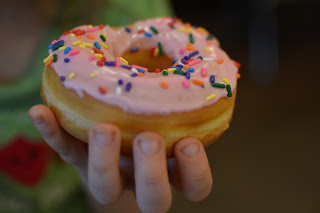