Keira has been a part of three Dream Quest Fun shows since she has been riding.  She looks forward to this event every year!  She loves to watch the other students ride, but she loves to show all of us what she is learning.  My parents and Adrian's parents were able to attend this year.  Keira was very excited to have both sets of grandparents watching her.

The fun show is set up where two or three riders are in the arena at a time.  They play games while riding on the horses.  In between groups of riders, they have games for any of the kids that want to play.  Kyle, Sophia, and Mercy played the first set of games, and Keira got in on the second and third round.  Avalyn wanted to play, but she was struggling so much with her asthma, that we didn't allow her to be involved.

The first game was a sack race.  Sophia was in the lead for almost the whole race.  But near the end, she fell, giving the win to Kyle!  Mercy had a great time.  The sack was almost big enough for her to run in, so she hopped a bit and ran the rest. 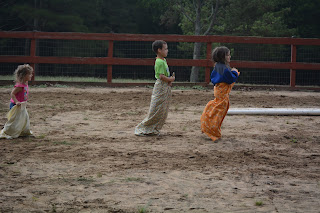 After the sack race, the kids raced on toy horses.  This time, Kyle was the clear leader. 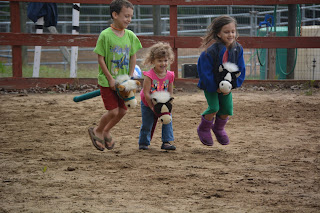 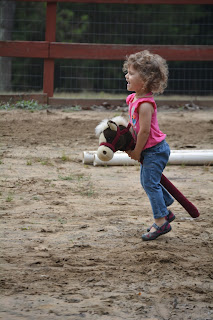 When the second set of games started, many more kids joined in.  They played a variation of musical chair.  It was fun to watch as many of the younger kids didn't understand the rules and just all gathered together in the same hoop! 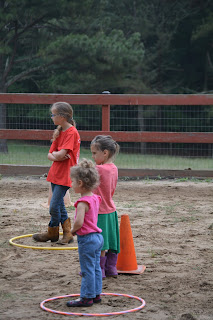 The last game was red light green light.  Even Mercy got that game and really enjoyed playing it.  Dream Quest gave all the participants a beanie baby for playing! 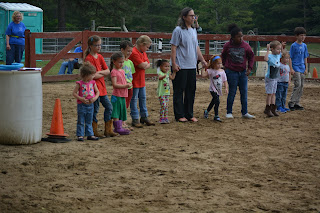 Patrick enjoyed sitting and being held most of the time!  Mamaw got some Patrick snuggles. 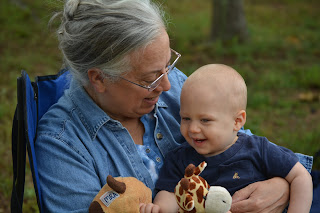 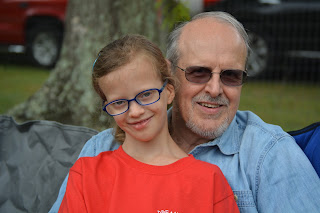 Patrick loves chairs.  Adrian brought the little two seater thinking that Patrick would enjoy having his own seat. 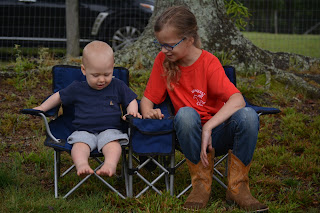 This is what qualifies as a good picture when you have six kids and not a lot of time! 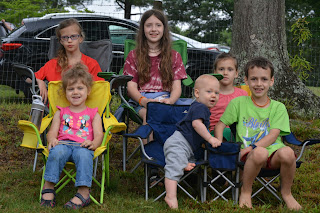 I do not remember all the games that Keira played while riding on Buddy.  She and two other students got to ride, trot, and play games together. 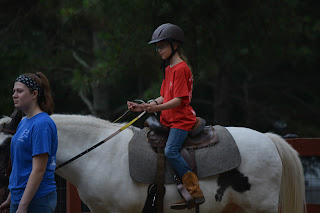 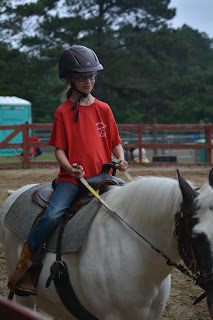 The students had to carry a golf ball on a spoon all the way across the arena first in one hand and then in the other.  Keira never dropped hers! 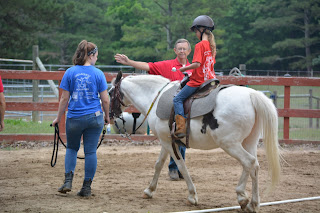 The students then had to direct their horses to the other end of the arena, pick up a beanie baby and carry it back safely to the other side. 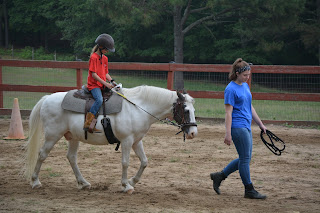 Then they played horse soccer.  Keira and Buddy did a great job! 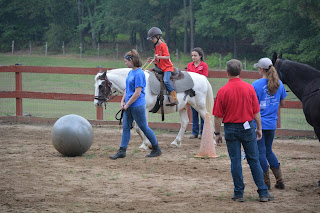 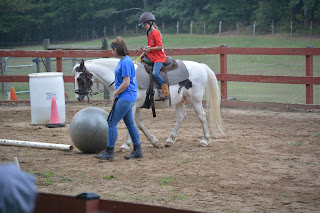 During Keira's time in the arena, it started raining!  I am thankful that they didn't end her turn early as she had such a great time.  She didn't mind riding in the rain!  I stood under a tree and watched, so I didn't get any pictures during the rain.
But in the end, Keira got a pink ribbon for being a part of the fun show. 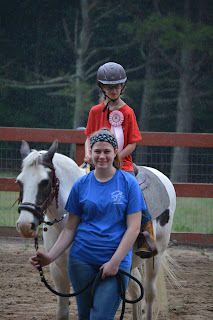 (One day Keira wants to be a volunteer and help other people who are riding horses.  Jackie has told her she has to be 14!)